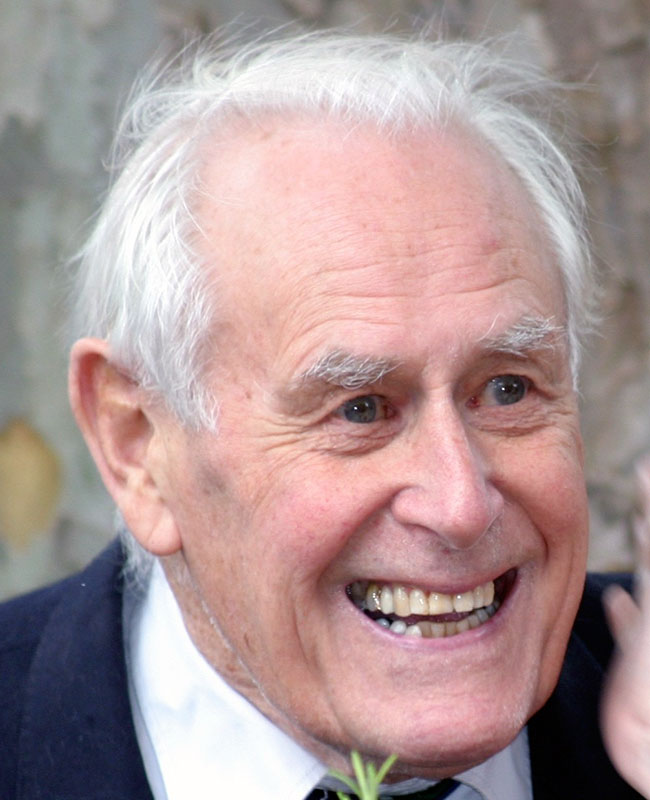 Click here to listen to some of Mike’s stories

“Mike believes in the hands-on, self-taught, apprenticeship approach to gardening”

Mike Bayon grew up in rural Cambridgeshire, observing country life passing in tune with the seasons and, from an early age, developing a passion for and deep understanding of plants. A gifted student and athlete, Mike won a scholarship to Cambridge and qualified for Junior Wimbledon. But World War II intervened, during which his courage in combat was recognised with the award of a Distinguished Flying Cross (DFC) for service with the Pathfinders.

After the war Mike became a Classics master, his charisma and quixotic approach to imparting knowledge inspiring thousands of pupils, many of whom remain friends to this day. His retirement from St Paul’s, Hammersmith, in 1982 proved to be no such thing; pursuing his lifelong hobby of gardening, he found his skills in such demand that he was encouraged to start a new career, launching into business as Mike Bayon Garden Design. As he says: “No – I didn’t plan it. It just happened. But it certainly proves there’s life after retirement!”

Already possessing an encyclopaedic knowledge of native British plants, Mike relished the opportunity to travel the world in the 1970s and ‘80s and learn more about exotic flora. He then used his formidable plantsmanship to create designs that combined indigenous and foreign plants in a style attuned to the modern English garden and its evolving climate. The company prospered and achieved national press coverage for its innovative work. For over a dozen years Mike was also the gardening columnist for a major London magazine group and his quirky, inspiring and informative articles won a devoted readership – as well as many new clients.

Mike calls himself ‘a gardener from the old school’, believing in the hands-on, self-taught, apprenticeship approach. He had a gift for teaching; he wanted recruits who showed initiative and wished to learn and he ‘interviewed’ them in a singular fashion. “Andy Gardiner came to see me for some work; I’d been picking beans at the allotment. I asked Andy if he could string beans, and he said he could. I chucked him a knife and he caught it. He was hired on the spot. And then one day I received a call from Roger Lang. He said that he’d known Andy for some years – and that he had always seemed vaguely dissatisfied. Now he seemed utterly contented; Roger decided that he too must drink from the same pool. And so, with no effort on my part, I gained a natural organiser who – given a free rein – would solve the problems of the world in minutes; meanwhile, letting drop, like golden pebbles, priceless one-liners.”

So Andy and Roger, with their perfect combination of creative and managerial skills plus wit and charisma to match Mike, joined the business. In a few years they would become partners and now, having worked together for almost three decades, they run Mike Bayon Garden Design. At the age of 90, Mike continues to impart his unique character to the business, dispensing gardening wisdom behind the scenes and, very regularly, beers in the pub on payday!